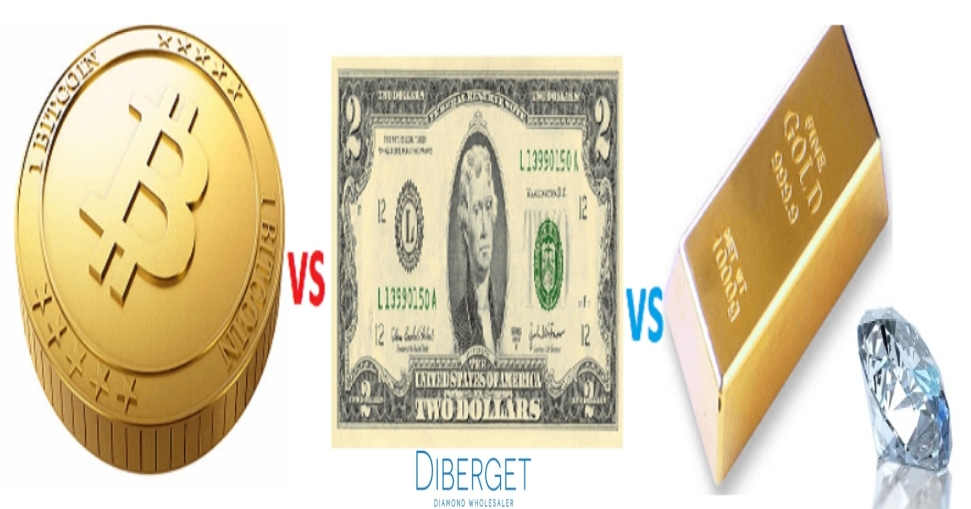 What have diamonds, Bitcoin, gold in common from an economical point of view?

Most of us think about Euro’s, US Dollars, Yen and other government created money as being true money.

In fact, an extremely substantial portion of the public still believes that government money is backed by gold or silver to a lesser or larger degree.

Unfortunately, there is not a single government issued money in the world that is currently backed by any precious metal or any other scarce commodity.

FIAT money has nothing to do with a car brand.

Government’s money is often referred to as FIAT money. This means that the governments declare their currency to be money by law. There is absolutely no underlaying value and thus FIAT money value is only backed by a ‘believe’ that it is scarce.

President Nixon declared in august 1971 that the USD would be temporary decouple from gold standard. Therefore, the government need not to purchase gold to create more FIAT money. This temporary gold decoupling is still in place today as you read this article. Since the USD is the world's reserve currency this means that the US government has the freedom to print as much money as they like, without any limitations. And that is exactly what has happened into multiple Trillion territories over a period of the last 2 years!

Just like a car, FIAT money loses its value very quickly after it leaves the showroom.

Any citizen that would practice money printing is a criminal by law.

Most economist predicts that the current monetary system will collapse as soon as the populations starts to understand the fraud committed by their own governments. Confidence is hard to build, but it can be destroyed in an instance.

Gold, shiny, heavy, made by stars only.

Gold is the oldest money in human history. It has been used by Egyptians and since then it has become money, or a very efficient store of value.

In fact, one might argue it has been the most successful type of money in the history of mankind.

Gold is scarce, it is quite portable, and it is extremely easy to exchange into other forms of money or commodities.

Gold is created when stars like our sun explode and form gold elements under extreme conditions. These conditions cannot be replicated on earth with the existing scientific knowledge. Therefore the only way to create more gold is to have our sun explode… but that might not be a good reason for humanity as a species.

Diamonds are scarce, even more portable than gold but mostly known for jewelry applications.

However, diamonds, unlike purified gold, are quite different in many characteristics (the famous 4 C’s). Therefore, it is not practical to use diamonds as a pure form of money. The finer quality diamonds are still incredibly attractive to add to one's portfolio to hedge against governments money depreciation. Although less liquid than gold, diamonds represent value for most humans.

Hedging diamonds has recently become popular again. The reason is very simple: diversification of the portfolio.

Bitcoin is the new kid on the block.

It has been created as an alternative money system as a direct response to the financial crash of 2008.

Bitcoin is at first difficult to understand for most.

There is no Bitcoin company, it exists only as digital code. In fact, it many ways you can think about the internet code being very similar: there is no ‘Internet’ company and yet the code is open for anyone to use that can access the internet.

We are used to money to be either physical or government controlled. There are thousands of Bitcoin variants by now, but for this article we will use Bitcoin as it is most widely known.

Bitcoin is not physical, nor government controlled. There is no need for banks or any third parties (like visa for example) to control whether a transaction is valid or invalid. Bitcoin uses mathematical rules (cryptographic code) that ensures that transactions are valid without any human intervention. This system works on mathematical concepts that have better than military grade security.

Bitcoin is the money for internet. But what does that mean?

It means that Bitcoin is integrated into the core of the internet protocol (the software that connects all devices on the internet). This is fundamental because it makes that the protocol cannot be stopped by any government. This has huge implications as you will read next.

Governments and banks are cheating the population by printing ‘fake money’.

Bitcoin is the nightmare for banks as their role will eventually become 100% obsolete. Since banks and governments are tied in a financially beneficial way, they will try to push back on Bitcoin to have the imposed FIAT system survive. The FIAT system however is built on trust and only trust of the population. That trust will vaporize with the next and coming budgetary crisis. Financial crises are not scarce, in fact they are built into the monetary system itself.

Our debt-based FIAT monetary system has an expire date and will become obsolete.

Scientist and computer engineers all agree: the only way to shut down Bitcoin is to shut the internet itself. Both the internet and Bitcoin form a monetary singularity.

We know that gold, diamonds, and other scarce commodities have preserved wealth over extended periods of time.

We know that 99% of governments issued FIAT money loses all or virtually all purchasing power in relatively truly short time.

How much time will it take before the general population will figure out this money fraud and turn to alternatives such as Bitcoin or proven safe havens like gold, silver, diamonds, and other scarce materials?

Einstein taught us that time is relative, but money is most likely not.

Extremely dangerous and cunning gang of thieves make off with 100+ diamonds in Westmeerbeek near Heist op den Berg
26 December, 2022

What have diamonds, Bitcoin, gold in common from an economical point of view?
21 October, 2021